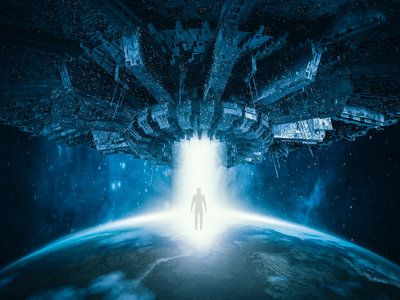 Note: This is the same as the regular CD except the digipak cover is signed by the main songwriter/producer, Dave Kerzner. It also includes a signed Acceleration Theory Postcard.

In Continuum's Acceleration Theory Part Two: Annihilation is available for pre-order on compact disc with the addition of a CD quality audio download (when available). New progressive rock music including songs written with musicians from Yes, Sound of Contact and more!

About the story... In Acceleration Theory Part One, the year is 2074 and the people of Earth are in danger. The same group of aliens who have secretly tried to help humans evolve to a higher level since the dawn of man have now given up on the people of Earth because of the pending destruction in a third world war. They are planning to invade the planet and annihilate everyone before the planet itself, a valuable asset to the galaxy, is ruined. But, a lone alien nicknamed AlienA (Leticia Wolf) goes rogue to come warn the people of Earth about the invasion. She crash lands on Earth and is saved by an Earth-man named Kai (Gabriel Agudo) who she falls in love with and teaches him her ways, especially how to rise and communicate with the aliens when they arrive. Their hope is to stop the invasion and convince The Galactic Council to give the people of Earth another chance to be more responsible with the planet. But, their mission is interrupted when AlienA is abducted and taken back to her home planet where she is banished until the invasion is over.

In Acceleration Theory Part Two, Kai knows what's coming but no one believes him. WWIII has started and he and everyone else have been drafted to fight the war. But, after the first nuclear missiles are fired they're shot down by the spaceships of the alien race who suddenly appear. They've given up hope that the people of Earth can accelerate to a level of being that would allow them to join the galactic community. But, with everything Kai has been taught by AlienA he is living proof that man is actually capable of much more than they thought. Will Kai be able to convince The Council to give the people of Earth another chance? Will the real enemy, the shapeshifting telepathic "vampires of the soul" known as the Scavengers, finally be revealed? You'll find out in the lyrics and written story that comes with the booklet of this exciting new sci fi concept album by In Continuum!

ships out within 5 days
Purchasable with gift card