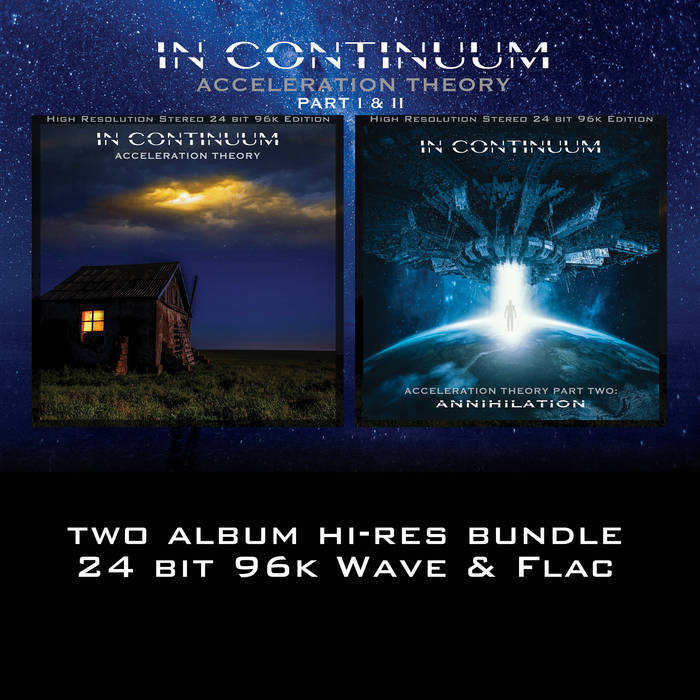 Alejandro Araujo Best Prog Album for 2018 !!! Another great high qaulity music delivery from Dave Kerzner
A must have for SOC and DKB fans !! Favorite track: Scavengers.

This item includes TWO ALBUMS, both the 12 tracks of "Acceleration Theory Part One: AlienA" album download in hi resolution 24 bit 96k NOW as well as the additional tracks of "Acceleration Theory Part Two: Annihilation" which will be made available to download by September 30th 2019! All together over 2 hours of music in hi resolution better than CD quality audio!

In Continuum on YouTube for videos and previews: www.youtube.com/incontinuumband

Hear a preview of the entire album here: www.youtube.com/watch?v=tTo3h5NooQs

"Acceleration Theory" is a sci-fi concept album about a female alien named AlienA (Wolf) who falls in love with an Earth man named Kai (Agudo). She comes to Earth to warn us that we're in danger of a pending full scale annihilation from the aliens who are responsible for mankind's evolution on Earth for millions of years.

In Continuum is a sci-fi-themed progrock band/project created by Dave Kerzner as a home for the songs he originally wrote for Sound of Contact. The debut album "Acceleration Theory" also contains songs written with Matt Dorsey, Simon Collins and Kelly Nordstrom. For more information and tour dates visit: www.incontinuumband.com